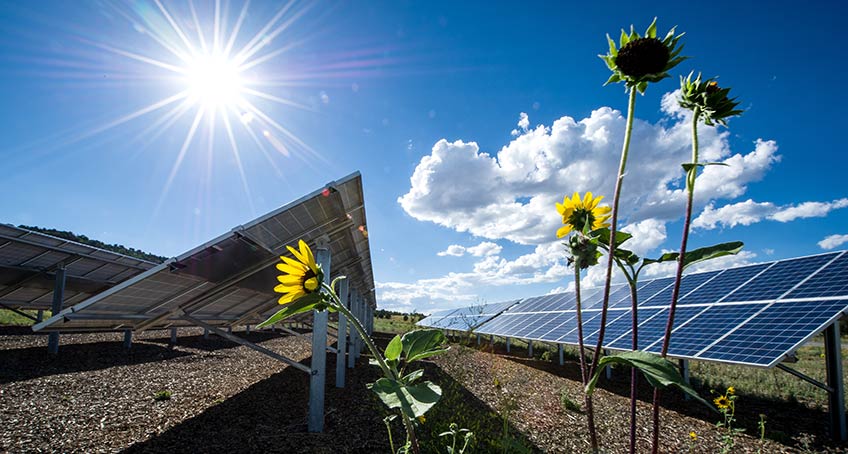 Photovoltaics (often shortened as PV) gets its name from the process of converting light (photons) to electricity (voltage), which is called the photovoltaic effect. This phenomenon was first exploited in 1954 by scientists at Bell Laboratories who created a working solar cell made from silicon that generated an electric current when exposed to sunlight. Solar cells were soon being used to power space satellites and smaller items such as calculators and watches. Today, electricity from solar cells has become cost competitive in many regions and photovoltaic systems are being deployed at large scales to help power the electric grid.

The vast majority of today’s solar cells are made from silicon and offer both reasonable prices and good efficiency (the rate at which the solar cell converts sunlight into electricity). These cells are usually assembled into larger modules that can be installed on the roofs of residential or commercial buildings or deployed on ground-mounted racks to create huge, utility-scale systems.

Another commonly used photovoltaic technology is known as thin-film solar cells because they are made from very thin layers of semiconductor material, such as cadmium telluride or copper indium gallium diselenide. The thickness of these cell layers is only a few micrometers—that is, several millionths of a meter.

A third type of photovoltaic technology is named after the elements that compose them. III-V solar cells are mainly constructed from elements in Group III—e.g., gallium and indium—and Group V—e.g., arsenic and antimony—of the periodic table. These solar cells are generally much more expensive to manufacture than other technologies. But they convert sunlight into electricity at much higher efficiencies. Because of this, these solar cells are often used on satellites, unmanned aerial vehicles, and other applications that require a high ratio of power-to-weight.

Solar cell researchers at NREL and elsewhere are also pursuing many new photovoltaic technologies—such as solar cells made from organic materials, quantum dots, and hybrid organic-inorganic materials (also known as perovskites). These next-generation technologies may offer lower costs, greater ease of manufacture, or other benefits. Further research will see if these promises can be realized.

Photovoltaic research is more than just making a high-efficiency, low-cost solar cell. Homeowners and businesses must be confident that the solar panels they install will not degrade in performance and will continue to reliably generate electricity for many years. Utilities and government regulators want to know how to add solar PV systems to the electric grid without destabilizing the careful balancing act between electricity supply and demand.

Materials scientists, economic analysts, electrical engineers, and many others at NREL are working to address these concerns and ensure solar photovoltaics are a clean and reliable source of energy.